Naru, the Indigenous Heroine We Deserve

As a young girl, I remember watching Pocahontas and being so proud that there was a Native princess.

But as I got older, I discovered just how shameful and offensive the film really is.

She would have been only 10 or 11 when she met John Smith, the white settler that becomes her love interest in the movie. Pocahontas’s true name was Matoaka. She was a Powhatan girl who was kidnapped, raped, and forced to marry her abductor. She died a few years later at just 21 years old.

Recently, Disney+ released a new film with another young Indigenous female lead: Prey, the origin story to the Predator series. Prey follows Naru, played by Amber Midthunder, who is of Sahiya Nakoda, Hunkpapa Lakota, and Sisseton Dakota descent. Naru is a member of the Comanche Nation and dreams of being a warrior, despite her mother's insistence that she follow in her footsteps and become a healer instead.

“Why do you want to hunt?” asks Naru’s mother Aruka.

“Because you all think I can’t!” Naru tells her.

Like Pocahontas, Naru is young, brave, and strong-willed, but Prey never perpetuates the stereotype of the Indigenous woman as a supporting character to the white savior like it did in Pocahontas and so many other films. Native heroism in film has been accompanied by a dangerous love between Natives and white colonizers where the heroine is torn between her people and her love.

The stereotypical tropes of Indigenous women typically fall in two categories: the lover/princess, which Prey avoided, or the victim. The victim trope usually results in a brutal beating and rape scene. The fetishization and sexualization of Indigenous women and girls in film has often left them nameless victims of brutality. Even in the 2018 film, Wind River, which was praised for raising awareness about the issue of missing and murdered Indigenous women across the country, the only time the main character appears alive is in the rape scene. 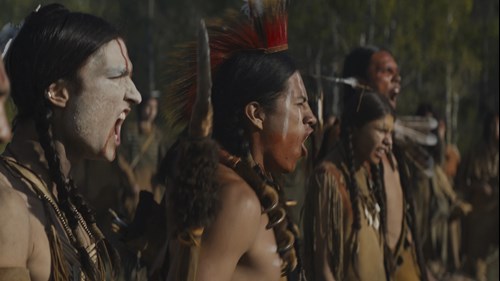 Prey passively addresses the perpetual violence against Indigenous women since first contact when Naru is captured by French fur trappers and thrown in a cage, but I was pleasantly surprised that there was never any sexual abuse. Additionally, the men had a clumsy, even barbarish demeanor, and the French they are speaking isn’t translated for the viewer. They are the background characters whose language is foreign and so insignificant that it doesn’t even need to be translated. They are the savages. They are the villains.

Ultimately, Naru is able to get her revenge. In the last standoff between her and the Predator, Naru outsmarts the Predator by using one of the fur trappers as bait. Naru avenges her brother and proves to her fellow Comanche that she is a true hunter when she arrives back at camp covered in glowing green alien blood and the grotesque head of her kill.

This is the Indigenous heroine I wish I could have had as a young girl. I am sure there are still people who see value in the film Pocahontas, but for many Indigenous women like myself, it is a painful reminder of the atrocious violence against our ancestors. With a majority Indigenous cast and producer Jhane Myers, who is Comanche and Blackfeet, Prey was able to reflect the Native women of the past and present more accurately. Prey reflected the Native women I know who embody strength, who are leaders and healers that are revered and respected. That is worth celebrating.

Need something to look forward to? Plan your next visit!

Luna Reyna is a Little Shell Chippewa descent and Crosscut’s Indigenous Affairs Reporter. In this role, Luna amplifies the experiences, voices, and work of indigenous communities creating fair, accurate, and effective coverage of varying intersections of indigeneity in the Pacific Northwest.