When you think of a MoPOP employee, what comes to mind?

A guitarist shredding an ear-splitting lick?

A horror fanatic who sleeps in a velvet-lined coffin?

Well, I have some upsetting news for you, my friend. I, Marie Baeta, am a n00b when it comes to pop culture. Raised in a family with very little connection to pop culture, it’s no surprise that I was late to the world of jump scares, blues scales, and mythical beasts. I didn't even see the original Star Wars until I was 32! 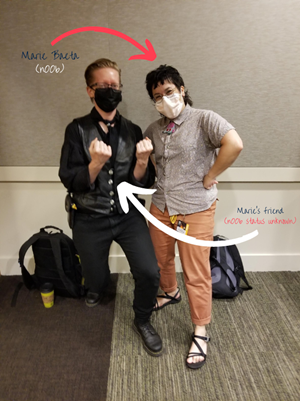 Luckily, I have other skills and interests of value to the museum, but sometimes, it feels like I’m an outsider in an insiders’ world. So when murmurs of Emerald City Comic Con began to drift around me, I got to thinking – what would it be like to attend this massive convention as an outsider? Would people be able to tell I was a fake? Would I be able to relate to others?

With a little bit of convincing and a promise of a blog post, I was on my way to my first “con” (as the insiders say), the Emerald City Comic Con!

Arriving and navigating the building through packed escalators was like entering a humming beehive. People of all ages and sizes, some costumed and some uncostumed, were bustling from floor to floor. My eyes ping-ponged around at the variety of cosplays: wigs of every color, accessories of every size, and lots of tight... very tight spandex. As I walked onto the show floor, I spotted the first cosplay I recognized: a tiny human dressed in a Pee-wee Herman suit pedaling around on a red tricycle (with his very 50’s fashioned parents close behind). “Yeah, I think I’m going to like this.”, I thought as I eagerly trudged forward into the stalls. 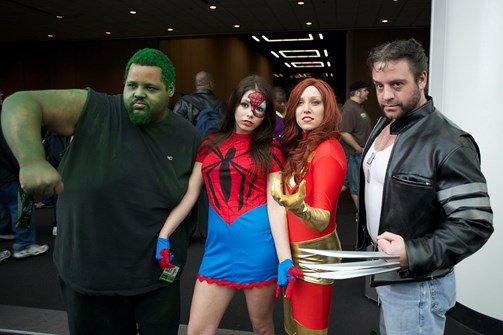 The day was filled with perusing incredible independent artwork in the “Artists Alley,” speeding around the show floor, and politely asking cosplayers for their photo. I also attended a few panels, including “Disability Identity in Comics” and “Supporting Women, Trans, Non-Binary, & 2 Spirit Cosplayers,” both of which expanded my understanding of inclusion and representation in pop culture, which I’m excited to apply to my work at MoPOP.

The cosplays and costumes were the highlight of my experience. From ornate and elaborate to character pajama onesies, the range of cosplays created a sense of camaraderie rather than competition. I was pleasantly surprised to recognize a few: Quail Man from the 90’s cartoon Doug, characters from Our Flag Means Death, cosplayers rocking the Bob’s Burgers look, and a group costume from Up. 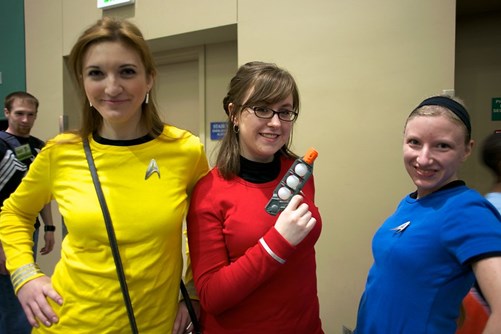 Did I recognize everyone’s costumes? Absolutely not.

Did I attend some insightful panels? Totally.

Would I go again? Yes, but next time with a costume! 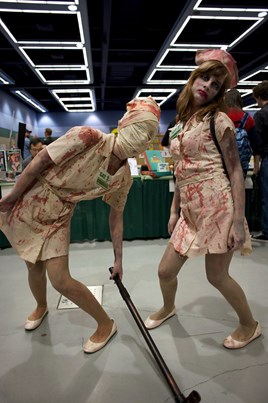 After visiting Emerald City Comic Con, it turns out I know more pop culture than I thought. I might never list off every Jimi Hendrix song title or know which type of bender I am, but that’s the thing about pop culture: the vast expanse of fandoms contain endless opportunities to explore, learn, and connect with others. All it takes is a little bit of curiosity to take the plunge into the Abyss. Or... Deep Space Nine? Or is it the Shire...? One of those, I'm sure!

Marie Baeta is a public engagement producer at MoPOP and a lover of science, art, and queer media.